I lived in several countries and people often ask me where I feel that I belong. To be honest, I do not have one specific country or city where I see my self living ‘forever’ or where I neccesarily ‘belong’.

I  like to travel and to experience different cities and countries and I like to change it up a bit every once in a while. And today while visiting my hometown Delft, I got reminded why I love my city so much…

I have moved to Antwerp, Belgium last October and so far I really do enjoy it. As being a Dutchie it is quite easy because in Antwerp where I live I can speak my ‚own’ language,
Dutch. Antwerp is also relatively close to my hometown in Holland, Delft. It is a 1,5 hour train ride so from time to time I go back of the weekend to enjoy my beautiful hometown.
Eventhough it is only a 1,5 hour train ride there is a huge difference between these to cities. Today we will discuss  a little bit about the people and the cultural differences. Being a Dutchie myself I often hear that i am quite direct and just say whatever is on my mind. Even though nobody asks for my opinion, I tend to give it whenever I feel like it. Annoying? Yes, for some. But for fellow Dutchies like myself it is mostly not. We all say what we think and are quite direct towards each other. Even towards strangers and that is something that I experienced today as well. Living in Belgium, I hardly ever had a local person who’m I did not know come up to me to make a joke or to comment on what I was wearing. In Holland it is quite normal. For me, the local Belgium people are more conservative and they keep their opinions to their selves. Of course, not everyone is like this, but the ones I have met so far are. And there is nothing wrong with that. I can really appreciate people like that too, but sometimes I just miss all the Direct Debby’s and Direct Dan’s.

Today, while visiting my hometown Delft, I was rocking my awesome new ripped jeans and I just love to wear it. My brand-new jeans is so incredibly stunning and comfortable and in the weekend I like to dress down a bit and rock my casual clothes.
As I was walking through my lovely city I got several comments, thank god they were all positive, but some where just hilarious.
The first one (that I actually got 3 times in 2 hours); 50’ish year old man who was drinking his beer just shouted to me while I was passing by in the most friendly way,
‘Hey girl, your pants is a bit damaged, it is missing some parts’. – I shouted back, I know right, but I can not afford a new one.
He laughed and winked and I winked back, well, it kinda looked more like a nervous twitch cause I really can not wink at all. haha.

A few minutes later a girl in her late twenties came up to me and complimented me on my jeans and asked me where I got them. And a bit later another older man thought he was quite original by making the ‚your pants are missing some parts joke’. Of course I still laughed and gave him one of my famous ‘it is supposed to be a wink but it looks more like an awkward twitch winks’. 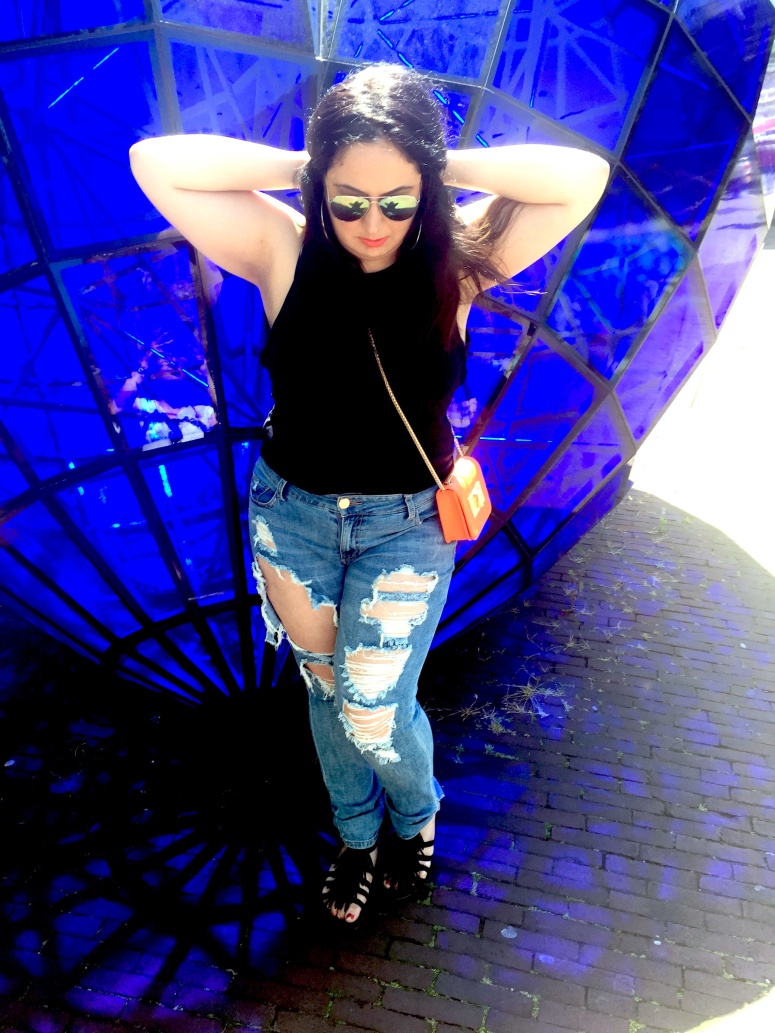 It might sound quite lame but I enjoyed every minute. The thing I love and appreciate about the Dutchies is the directness, the friendliness and the casual attitudes. Randoms coming up to you to talk to you, make a joke with you and just to have fun. I am like that as well..and sometimes people do not understand that attitude. They immediately think that you want something from them just because you pay them a compliment or are nice to them for ’no reason’. But in the Netherlands I do not experience that at all.. so for today, I actually felt like I belonged in the Netherlands, between all my direct Debby’s and Dans.
But even though I felt like I belonged I won’t stay long, #commitmentissues. Tomorrow I will go back to my Belgium peeps and my lovely city of Antwerp.
Because for now, that is the city that I call ‘my home’.
xoxo
Follow me on FB: *Click and Instagram: *Click